The Westchester Corvette Club said a fond "good-bye" to our long-time member Mitch Mitchell on Wednesday, May 9, 2018 at dinner at Chili's in Somers.  Mitch was a member of the Club for about 9 years and has contributed immensely, including as a member of a number of committees.  Mitch was voted by the Club as an Honorary Member and was awarded a plaque.  He  is moving out of state and will be greatly missed.  Best of luck Mitch!

The WCC along with the Connecticut Valley Corvette Club (CVCC) supported the CT State Troopers Annual "Toys for Tots" Toy Drive on Sunday, December 3, 2018 despite the rainy weather.  The CT State Troopers led the caravan from the Danbury Fair Mall in Danbury, CT to the Wyndham Hotel in Southbury, CT. Great day of giving to others less fortunate.

The Westchester Corvette Club held its Annual Holiday Party at Ceola Manor in Jefferson Valley on Jan. 20th  ...
​Another successful social event thanks to the Event Committee!

The Westchester Corvette Club, as it does every year, showed up in force at the annual Corvettes at Carlisle in PA, the largest and most fun-filled Corvette event in the world.

The Westchester Corvette Club held its August 2018 Monthly Cruise Night on Tuesday 8/21/18 at Chili's in Somers.

On Sunday, July 22nd, 2018 the Club held its 5th Annual Club Picnic at Downing Park in Yorktown Heights.  It was an "all you could eat BBQ" with much more than anyone could eat.  Almost 50 people attended, and a great time was had by all, despite the iffy weather.  Special thanks to Tim M. & Nick C. for the cooking, and to Pete L., Vince Q., Jimmy V. and Phil R. for going shopping in the AM.  Check out the photos below, courtesy of Jim V. and Vince Q.

The Westchester Corvette Club took a run to Jannetty Racing in Waterbury, CT on Saturday, April 28, 2018.  This was Jannetty's 32nd Anniversary Open House which included a tour of their shop and a BBQ.  There was also an opportunity to have your car put on the dyno to get a true reading of your rear wheel horsepower & torque! 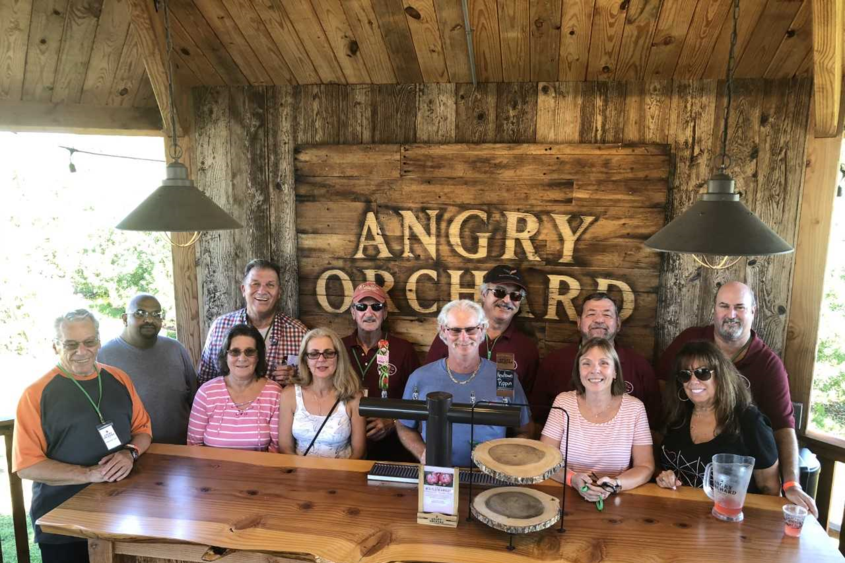 On Sunday, August 19th, 2018 the Club held its annual Mystery Run.  Fifteen cars with 25 members and spouses traveled from NY to Gillette Castle State Park, East Haddam Ct. We toured the William Gillette Castle and grounds. William Hooker Gillette (1853 to 1937) was an American actor-manager, playwright, and stage-manager in the late 19th and early 20th centuries.  He is most famous for his stage portrayal of Sherlock Holmes and for the extraordinary stone castle he built on a promontory above the Connecticut River in East Haddam.  After touring the Gillette Castle we traveled to the picturesque village of Essex. We had lunch at The Griswold Inn located near the foot of Main Street in Essex Village on the Connecticut River. We had a great lunch and afterwards, members headed home or stayed to do shopping.  Dennis T. and Janet F. did an outstanding job organizing this event.

On Sunday September 16, 2018 the Westchester Corvette Club went on a club run to Angry Orchard in Walden, NY for tours and of course, a few cider tastings.

On Saturday, September 29, 2018 the Westchester Corvette Club joined the Kerbeck 15th Annual Toys for Tots Corvette Caravan in Atlantic City, NJ.  About 20 Club cars made the run.  The Club donated about $250 worth of toys to the cause.  The Club's President, Dennis T., served as a Celebrity Judge.  Club Member Joe S. won a trophy for his 2019 ZR1.

On Sunday, September 30, 2018 the Westchester Corvette Club held its Annual Fall Car Show at the Factoria at Charles Point in Peekskill, NY.  A portion of the proceeds from this show were donated to The Ken Hamilton Caregivers Center at Mt. Kisco Hospital.  Click here to see some photos of the participating vehicles.

Our first car show of 2018 was on Sunday, July 29th at North Castle Community Park in Armonk NY.  It was our most successful show ever to date.  The weather was perfect, and we had over 180 vehicles register.  Click here to see some photos of the participating vehicles and trophies awarded.

The Westchester Corvette Club went on it's 5th Annual "Chicken Run" on Saturday June 2nd, 2018 to Wrights Farm in Harrisville, RI.  This run was about 3 hours each way, but well worth it for a complete "all you can eat" chicken or steak dinner  including salad, family style sides, coffee, and ice cream.